Nation, State and Pancatalanism
Is Catalonia a nation?

Recently there has been an increasing amount of debate in Spain about the question of whether there is a Catalan nation, a question that also arises for Spain. As recently as December last year, the PSC (Catalan PSOE = Socialists) described Spain as a nation of nations[1].

Catalan separatists often speak of the existence of a Catalan nation[2] long before the term nation even existed as a political subject. It is time to look at the question of what the terms nation and state mean. Even more important is to understand what these terms are still good for today and what they can or must be used for. This will be briefly attempted in the following essay.

In feudalism, which experienced the beginning of its end with the French Revolution (1789) and American independence (1783), nation was often only a term taken from Latin to designate peoples. The nobility was completely indifferent to the formation of its states, whether they ruled over Bavaria, Bretons, Greeks, Russians or any other people or communities. Power and wealth alone was important, nothing else. The people, predominantly the peasants, had nothing to say about any of this anyway.

1) Spain: In 1516, the Habsburgs ascended the Spanish throne with Emperor Charles V (King Carlos I), an Austrian. In the War of the Spanish Succession (1701-1714) they lost this throne to the Bourbons (French), from whom the present Spanish royal family also originated.

2) Great Britain: The British House of Windsor has only been calling itself that since World War I, because they are the descendants of the German nobility of Saxe-Coburg and Gotha. Only in 1960 Queen Elizabeth II announced that she was a Mountbattan Windsor, a variation of the German word Battenberg.

3) The „Holy Roman Empire of German Nations“ was only ended in 1804 by Napoleon, supported by many German troops from the German small states (small powers). The Emperor of this Roman Empire (Franz II) then became Emperor of Austria, which itself was a multi-ethnic state.

The nation as a left-wing concept of struggle against feudalism

In the French Revolution, the concept of nation was equated with state and „Liberté, égalité, fraternité“ (freedom, equality, fraternity) was understood by all French people. But this is where the difficulty begins, because not all the inhabitants of France spoke French as their mother tongue, something that the Académie française, founded in 1635, still tries to rigorously enforce today. In a sense, the French nation was referring to a unity of language, culture, ethnicity and religion, which, despite all the inaccuracies in its definition, were understood as being directed against feudalism. The last particularly evident because the Revolution wanted to see religion replaced by reason. Even a new calendar was introduced.

The inaccuracies of the founding concepts of language, culture, ethnicity and religion

These inaccuracies in determining language, culture, ethnicity and religion can be observed particularly well in Germany. German is spoken in Germany, Austria and Switzerland. Germany is Protestant in the north and Catholic in the south, (By now the atheists could be stronger than any other religious community). Must one speak of differences rather than common characteristics in Prussian and Bavarian culture? (By the way, Prussia was a state within the German state until 1947.) As far as ethnic groups are concerned, Germany, like almost all European peoples, is a mixed folk, in which the Romans have left their mark just as much as the Slavs in the East, especially in Prussia and Saxony.

Nation as a right-wing concept of struggle

Many extreme rightists today use the term nation to exclude foreigners. In Germany they speak of Bio-Germans, especially to distinguish themselves from migrants from Turkey. In Catalonia some separatists behave similarly. In several articles I have drawn attention to the racists in the leadership of the ERC (Left Republicans of Catalonia) including the current ERC president Oriol Junqueras. On 12.02.2020, Cronica reported „The mayor of Vic believes that 'native Catalans' have a different physical appearance“[3] and she criticises the fact that Spanish is spoken to people who do not look Catalan. The mayor of this Catalan town of 46,000 inhabitants, Ana Erra, a member of the JxCat party of Puigemont, shows that racism is not unusual among separatists, whether they call themselves left or right-wing. One is desperately tempted among the extreme Catalan separatists to define nation by ethnicity and language imposition to use the Catalan language.

Almost all European states have within their borders populations that speak a different language, are culturally different and religion is no longer a reliable distinguishing feature. Even ethnic differences are difficult to discern and the attempt, as Ana Erra does, is condemned to ridicule.

Given the „size“ of European peoples, states and nations, it is appropriate to look at geopolitics. The USA is the leading empire of our time. This position is being challenged more and more every day by China, and Russia is also resisting this supremacy more and more. What role do the formerly powerful colonial powers France and England still play? At most they are seen as appendages of the USA in NATO. None of this looks like a peaceful development.

Whether one understands the Catalans as a nation or not is certainly an interesting question and for me personally as important as who will be the next champion in the Spanish(!) football league, Madrid or Barcelona. But that shouldn't play a political role, as Puigdemont is now demanding [4]. Spain and the autonomous regions of Spain must find a way to work together. There are many tasks in Spain and in the EU that must be shaped democratically if it is to survive. Language imposition, racism and fanatical separatism only prevent us from installing Europe as an independent force that should mediate and bring peace to the conflict between the superpowers.

[2] An example from the ERC: Decaració ideològica del ERC, (Ideological explanation by the ERC)
https://www.esquerra.cat/arxius/textosbasics/declaracio-ideologica.pdf
„The Catalan nation was divided into different territories by imperial policy: Northern Catalonia to the French state, the Principality of Catalonia with the Ponentine strip, the Valencian Country, the Balearic Islands and Pitiüses to the Spanish state and Andorra, a separate state. This division is the fruit of more than 300 years of oppression...“ it says on page 19 (emphasis added by me) If you go back 300 years with the 1993 updated declaration you end up with the French Sun King in 1693, the idea of a nation only developed with the French Revolution (1789) and reached in Germany its first peak with the National Assembly in 1848.

Myths and deceptions of Catalan nationalism 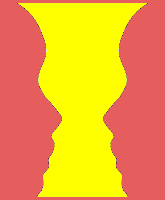 Peredo Alvaro discovered on his homepage "piratas&emperadores" the myths and impostures of Catalan nationalism.

1980 the Spanish journal "El Periodico" published a secret document about the strategy of the Catalan government. It shows in a frightening way the actual spiritual world of the separatist leaders.

Now it is available in english translation. 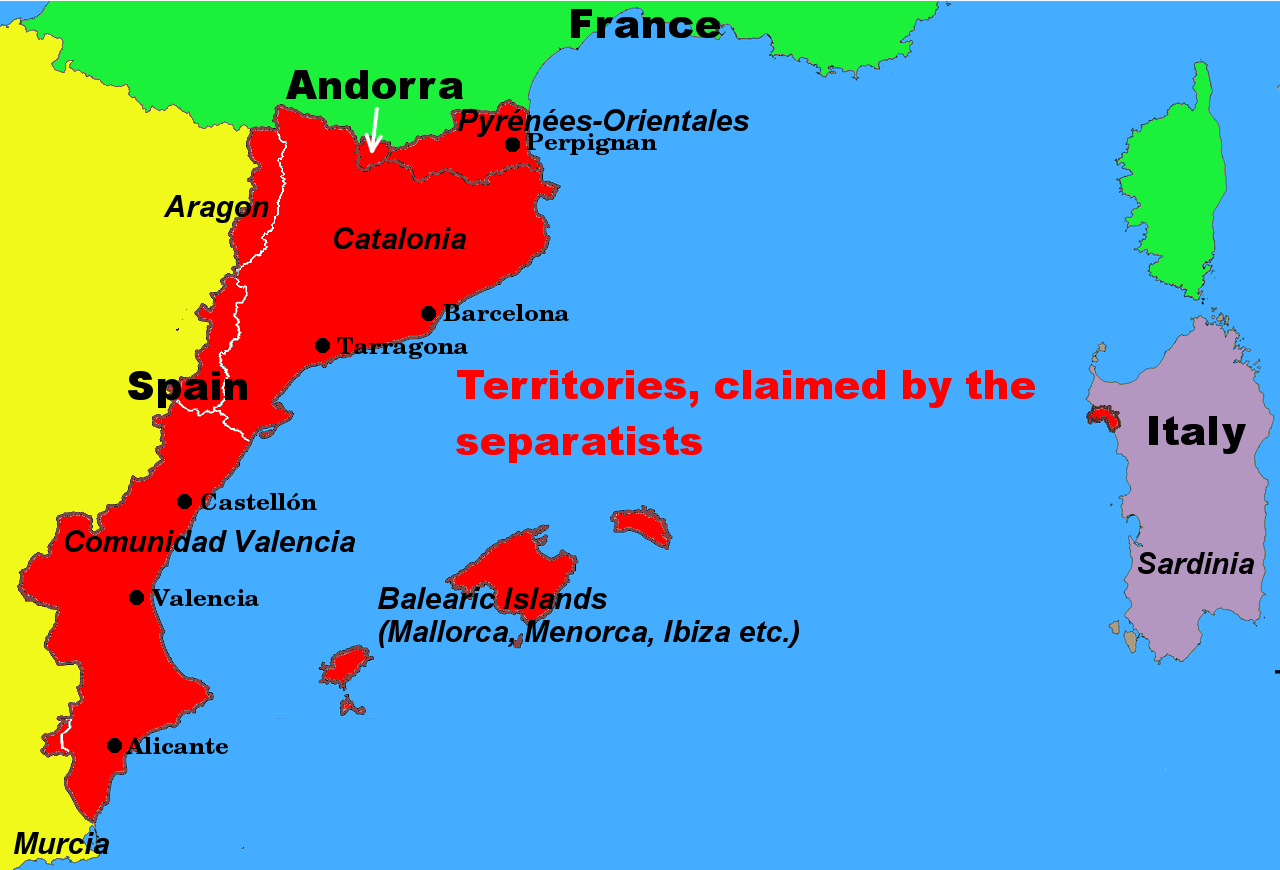 The Catalan government exports the conflict into communities with Catalan population, supporting all efforts of the separatists including financial means to destroy Spain.
An important tool is the establishment of a language dictatorship that is not afraid to use the same means as Franco.

In 2017, the teachers' union AMES published a study on school textbooks, as they appeared in Spain and in Catalonia on the same topic. In this study the indoctrination becomes clear, as it describes how Separatists operate. It is now translated into English 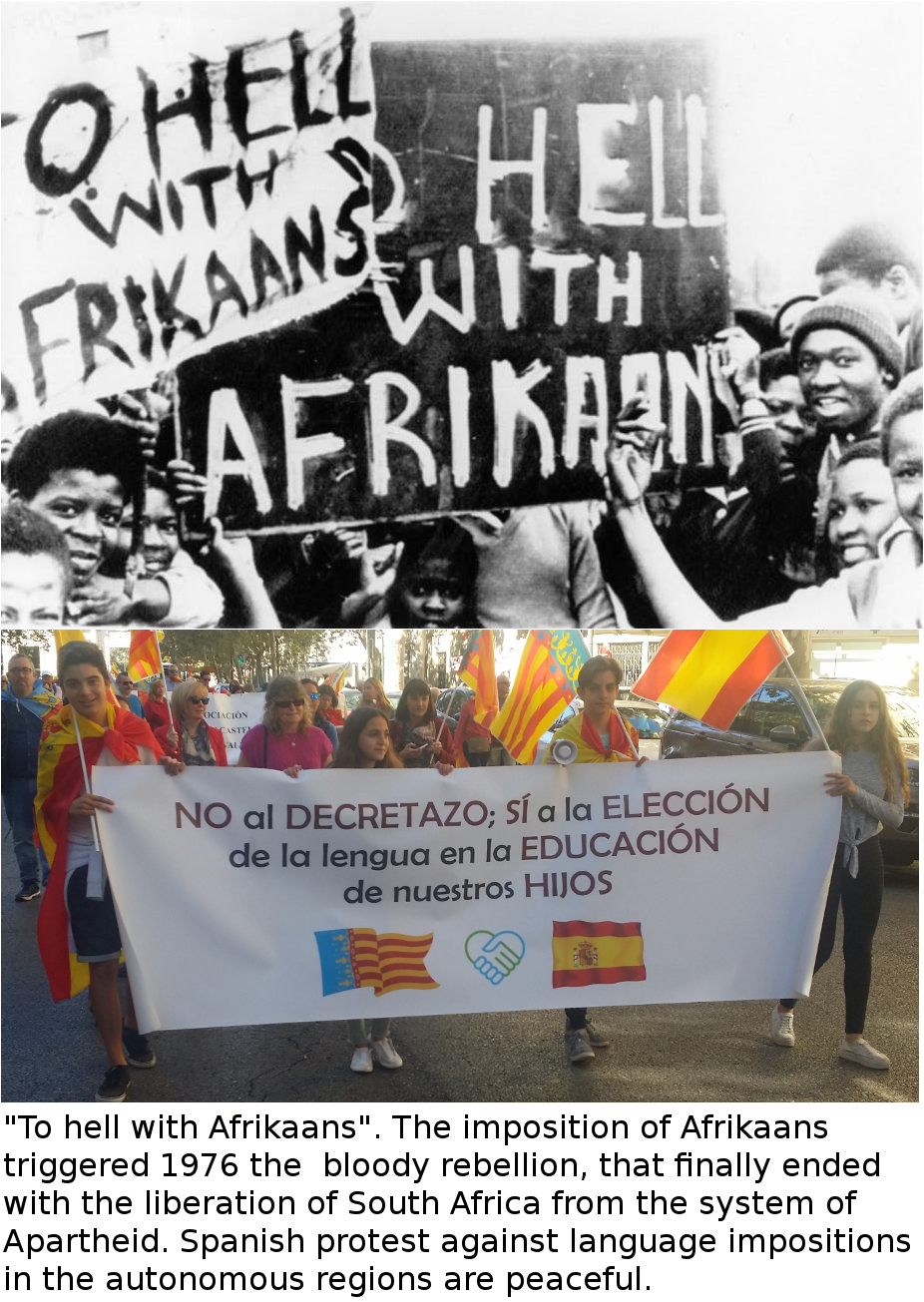 An essay in 6 parts on the potentially violent effect of language imposition containing contributions from South Africa, Catalonia, Ukraine and France. 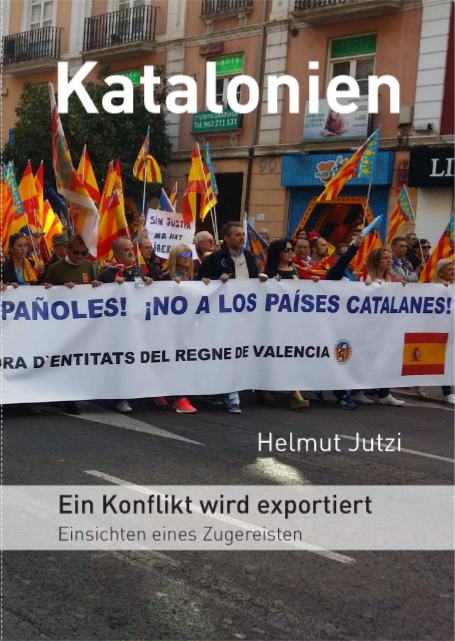 The title says: "Catalonia, a conflict is exported. Insights of a migrant"
Sorry, up to now, this book is only available in German. However, drop us a line, if you are interested to learn more Contact.